Арсен Аваков. Официальный сайт / Mass Media / Publications and interviews / Mayday! Donbas: the threat of an ecological catastrophe in the center of Europe 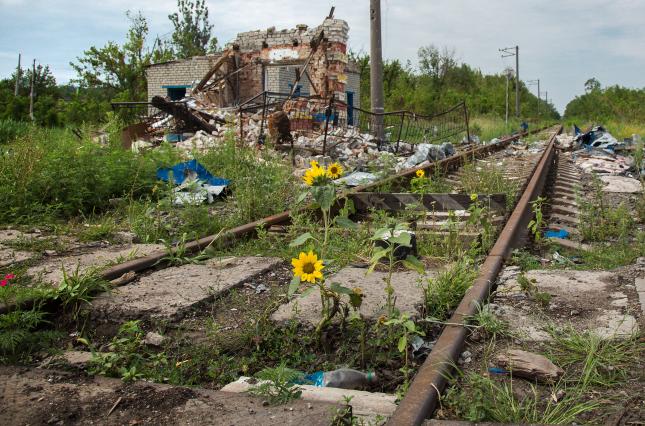 Mayday! Donbas: the threat of an ecological catastrophe in the center of Europe

The ecological catastrophe in the Donbas, caused by the armed aggression of the Russian Federation, will be an environmental disaster for the whole of Europe 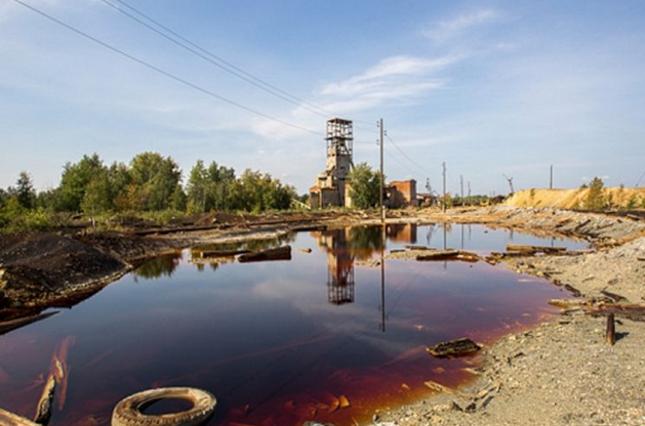 In April 2018, the invaders stopped the pumps that had pumped out water from the mine “Yunkom“

When I worked there, I have developed mathematical models for assessment of the balance of natural resources.  I traveled around the country analyzing statistical data.  Since then, I know this topic quite well and understand the level of threats.  Therefore, when I saw data on environmental risks in the occupied Donbas region, I realized – it’s time to rise the alarm!

The occupation authorities feel themselves temporary time servers in our territory.  Our problems are not their pain, they do not think about the future, and therefore they can lead the region to a truly large-scale ecological catastrophe.  Do you think I’m exaggerating? No!

In my article “Strategy of the restoration of the integrity of Ukraine and de-occupation of the Donbas. “Small steps” Mechanism”, I have especially singled out the point on the need for urgent measures to eliminate environmental risks.  And it is the only point in this article to which a detailed annex was attached.  Today I want to emphasize once again the degree and urgency of the environmental threat in the temporarily occupied territories, because, I repeat: the ecological catastrophe in the Donbas, caused by the armed aggression of the Russian Federation, will be an environmental disaster for the whole of Europe.

Why the Ministry of Internal Affairs so insistently raise this question? Because this entire region, in fact, is a zone of a potential environmental emergency situation, the causes and threats of which should be urgently eliminated until it extends to the entire territory of Ukraine and neighboring countries.  And this is a great danger!

Here are just a few facts that I think will push you to reflect on this topic and act.

City of Bunge, Donetsk region (until 2016 – Yunokommunarovsk): The threat of radioactive contamination

Most likely, most of you did not know that in 1979 an experimental underground 300-ton nuclear explosion was carried out in the mine “Young Communard” (Bunge, Donetsk region) at a depth of 900 m.  As a result, a radioactive glass capsule was formed that contains radioactive isotopes of cesium, strontium, and plutonium (the Cleavage facility). (More details of radiation threats that have intensified or arisen as a result of the occupation as of April 2018, see https://zn.ua/energy_market/mutacii-opasnosti-281815_.html). In case of its destruction, extremely radioactive contamination of groundwater can occur, which will spread to a vast territory.  According to the observers of the OSCE monitoring mission, in April 2018 the occupiers stopped the pumps that had pumped out water from the Yunkom mine. 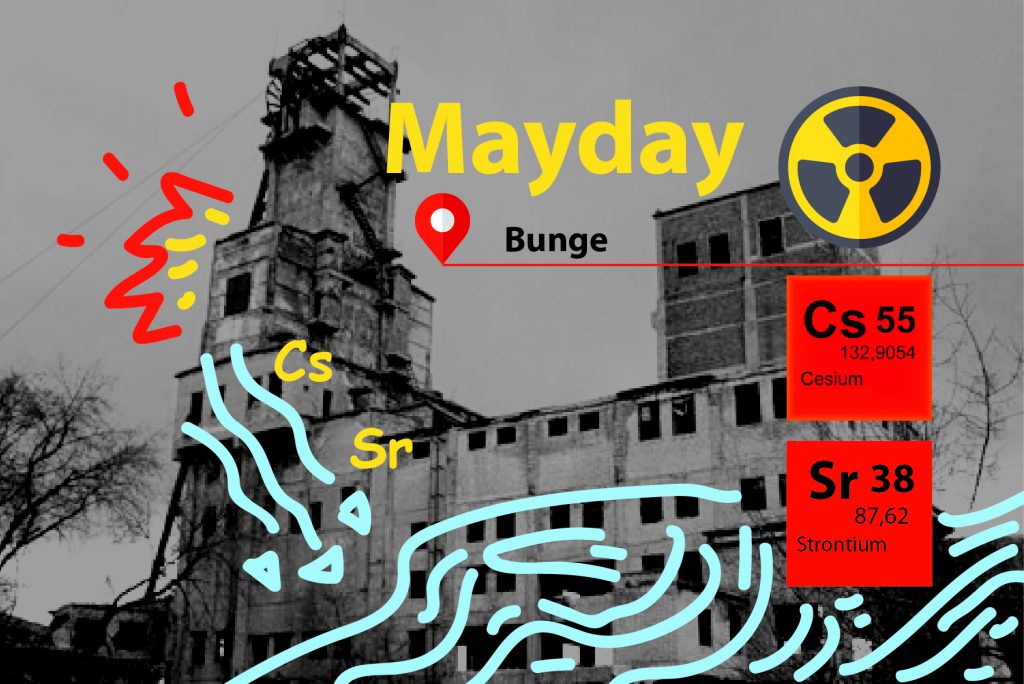 The experts consider that it will take from one to two years for the mine waters to reach the critical level of the river Bulavinka, after which the soil erosion will follow, which in fact will mean the subsidence of the city of Bunge and the destruction of the Cleavage facility. The radioactive water will further enter the Kalmius and Seversky Donets rivers, further into the Azov Sea, and then into the Black Sea.  Pollution of the internal sea will exceed the norm by hundreds of times.  Not only Ukraine but also neighboring states will be exposed to radioactive contamination.

In the town settlement Novgorodsky (Donetsk region) a phenol manufacturing plant is located, which dumps wastes, containing phenols, phenolic compounds, sulfuric acid, formaldehyde, oil products, naphthalene and other chemicals into its settling ponds. Their penetration into the ground can lead to severe environmental consequences. Phenol and its compounds belong to the second class of chemical hazard (very dangerous substances).  Dust, vapors and phenol solution cause severe chemical burns of the mucous membranes of the eyes and skin, damages to the renal system, liver, respiratory and cardiovascular system, nervous disorders, and can lead to paralysis of the respiratory center. 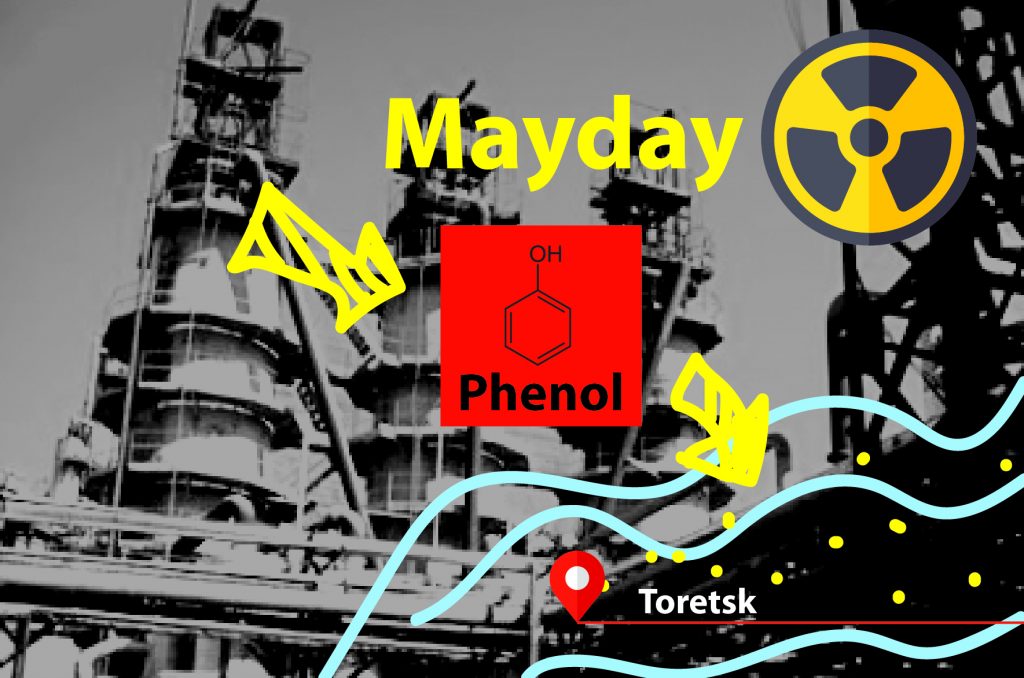 The maximum permissible concentration of phenol is one-thousandth milligram per liter of water.  According to experts, there are 270 tons of phenol and phenolic compounds in the sedimentation tanks and settling ponds…

The artillery shelling in 2014 has damaged the dam of the settling ponds.  The occupiers permitted to repair the dam only in 2016, but the local “authorities” did not allow to complete the repair fully.  Currently, access to the damaged area is again closed.

If the dam is breached, the chemicals will flow into the Krivoi Torets River, then into the Seversky Donets, and then they will enter the Sea of Azov.

The city of Dovzhansk, Lugansk region:  The threat of atmospheric pollution with hydrogen sulfide

In the vicinity of the town of Dovzhansk, (Lugansk region) there are 45 smoldering dumps.  As a result, the concentration of hydrogen sulphide in the city air is 45 times higher than the permissible norm.

Hydrogen sulphide is heavier than air. Thus it can hang over the source and spread low over the ground with the wind.  When people inhale the hydrogen sulphide vapors of increased concentration, it depresses the respiratory center, stops the transportation of oxygen in the blood, causes depression, mental disorders, and damage to the autonomic nervous system. 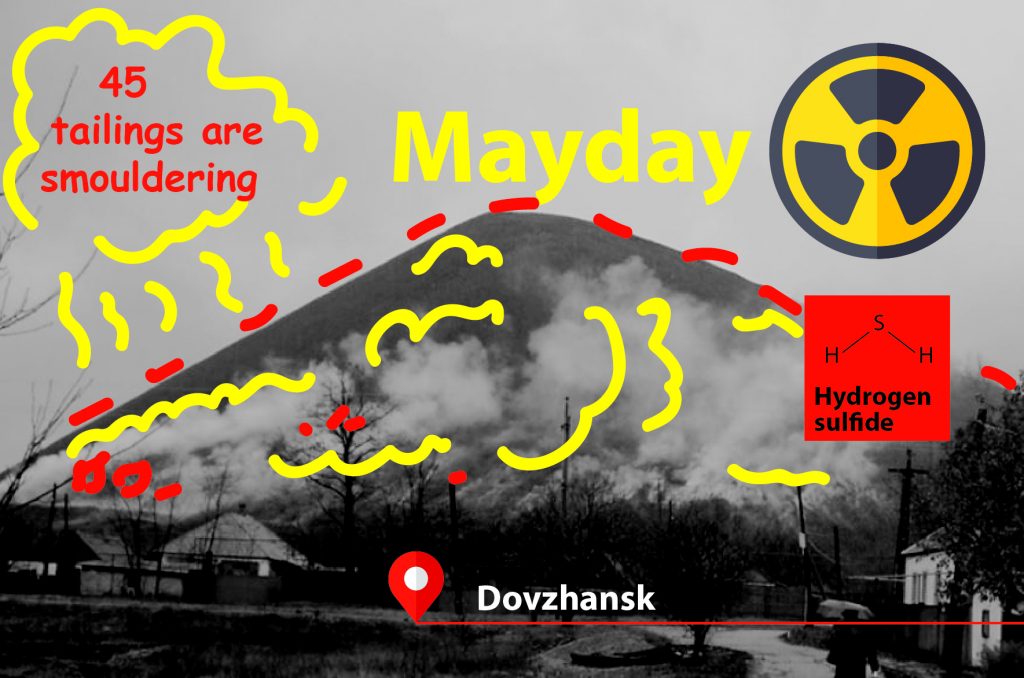 In addition to hydrogen sulphide, smoldering industrial waste dumps vent into the atmosphere the big list of heavy and rare-earth elements, the concentration of which is unknown today.

Gorlovka, Donetsk region:  The threat of penetration of “dead” mine water into the water supply system

According to available data, in the Gorlovka area, the mine water level has risen from the minus 1.5 km mark in 2014 to the minus 400 m today.

Mine water is “dirty” water with the unacceptably high content of salts and impurities of heavy metals which makes it unfit for humans and the ecosystem as a whole.  Such water kills all living organisms and under no circumstances can be used either as drinking water or even for technical purposes.   If it comes to the surface, it will cause catastrophic pollution of the water basin on a vast territory.

The rise of the level of “dead” water and waterlogging are caused by the massive disconnection of pumps that pumped out mine water even in closed mines. Now, these pumps are being cut off massively, and the equipment and wiring in the mines are being plundered. 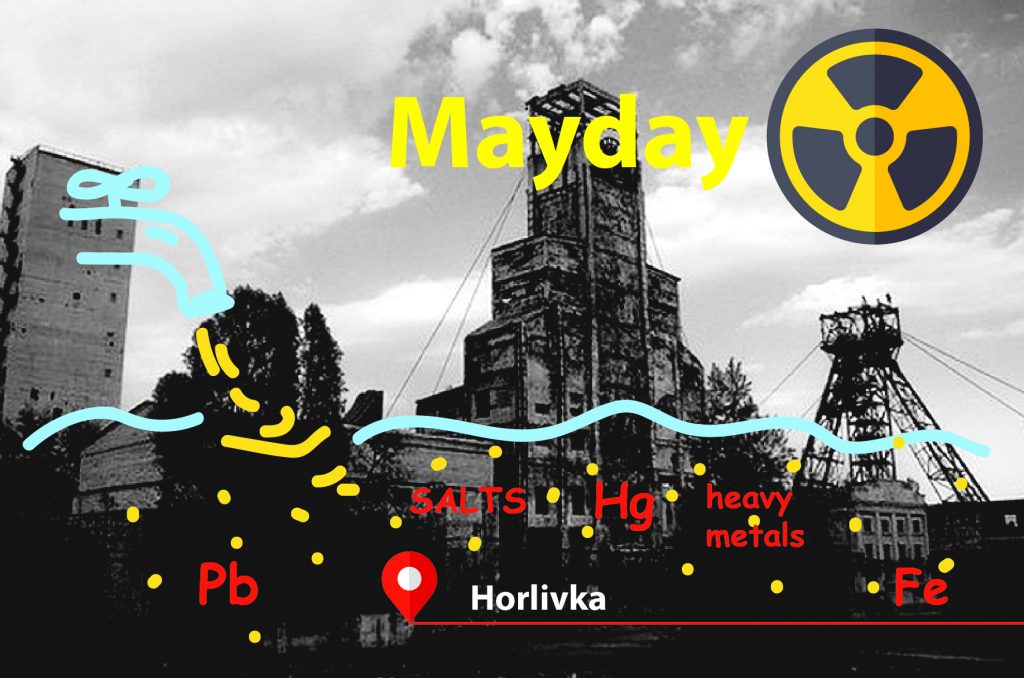 According to the results of the environmental monitoring of the eastern territories conducted in 2017 within the framework of the joint project of the OSCE Project Coordinator and the Ministry of Natural Resources of Ukraine, the pollution of surface and groundwater in the region has reached a critical level.

Donetsk:  The threat of subsidence of soil

According to satellite monitoring, as a result of flooding of Donbas mines, the land on the territory of Donetsk has already subsided on average by 25 cm, and in some areas of the city – by 53 to 92 cm.

The land moves not only around the gob piles of dying mines but also in populated areas.  In the opinion of experts engaged by the OSCE, the threat of man-made disaster covers virtually the entire territory where the coal mining took place.  The Donetsk coal basin is a giant technogenic-geological system, in which most mines are hydraulically linked with each other. Thus, the closure of any mine leads to the filling of underground voids with mine water and, accordingly, to subsidence of the ground, which, in turn, damages the constructions, buildings, and communications in human settlements. 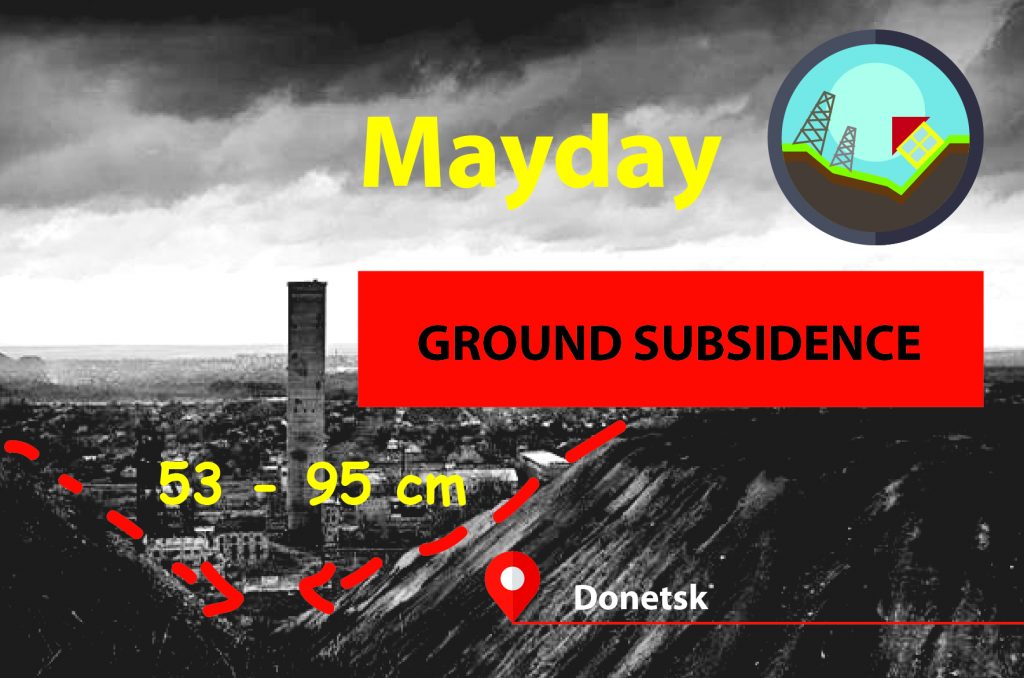 Today 36 mines are shut, their equipment was looted, and mine workings continue to flood with toxic waters. Another 70 mines are now at the liquidation stage, and if stopped they will inevitably be flooded.

Here I use this definition in the most direct, geographic sense. I have mentioned only five concrete examples. However, each of them represents only a part of large-scale processes of the ecosystem destruction in the region.  The flooding of mines, subsidence of soils, the release of “dead” water and its entry into the water supply system for local residents and water reservoirs, chemical and radioactive pollution, the risk of man-made accidents – all of them are threats not only for the temporarily occupied parts of the two Ukrainian regions and not only for the country as a whole.  Each of them is also a real and rather close in time threat to neighboring European countries and can lead to catastrophic consequences for the entire ecosystem of the continent.

Our experts conducted a detailed analysis of environmental risks, using data from the open sources, which will be published on the websites of the State Emergency Service and the Ministry of Internal Affairs (see: Publication).  It is an extensive document, from which I presented here only a few paragraphs in abbreviated form.  In my opinion, this is enough to understand the complexity of the situation and the need to take urgent systemic measures to eliminate threats.

I want to emphasize once again: today we do not have reliable information about the state of hazardous facilities and the level of danger of the running natural and technogenic processes.

Maybe, the situation went so far down the road that an urgent large-scale international operation is required to eliminate the consequences of the “management” of the occupation authorities in the seized territories.

Such an operation is only possible in the case of cessation of hostilities and within the framework of the comprehensive process of de-occupation of Donbas.  And this makes de-occupation a top priority of world politics.

The tough position of international organizations and the public opinion should stress the relevance of the issue of settling the situation in the east of Ukraine for the current agenda.

Nature does not take into account the nuances of politics.  The laws of physics and chemistry are inexorable.  We must be in time to prevent a disaster! 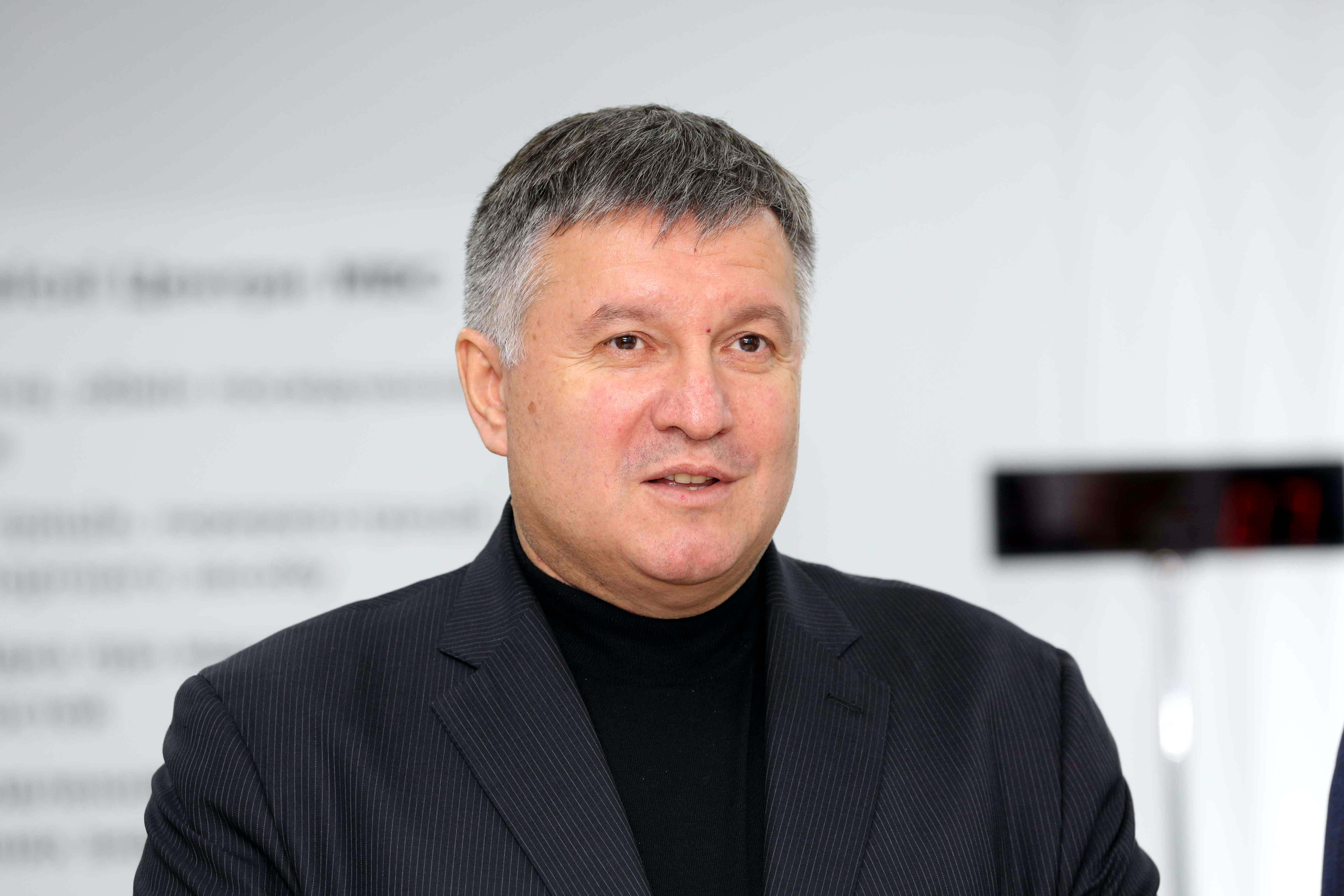