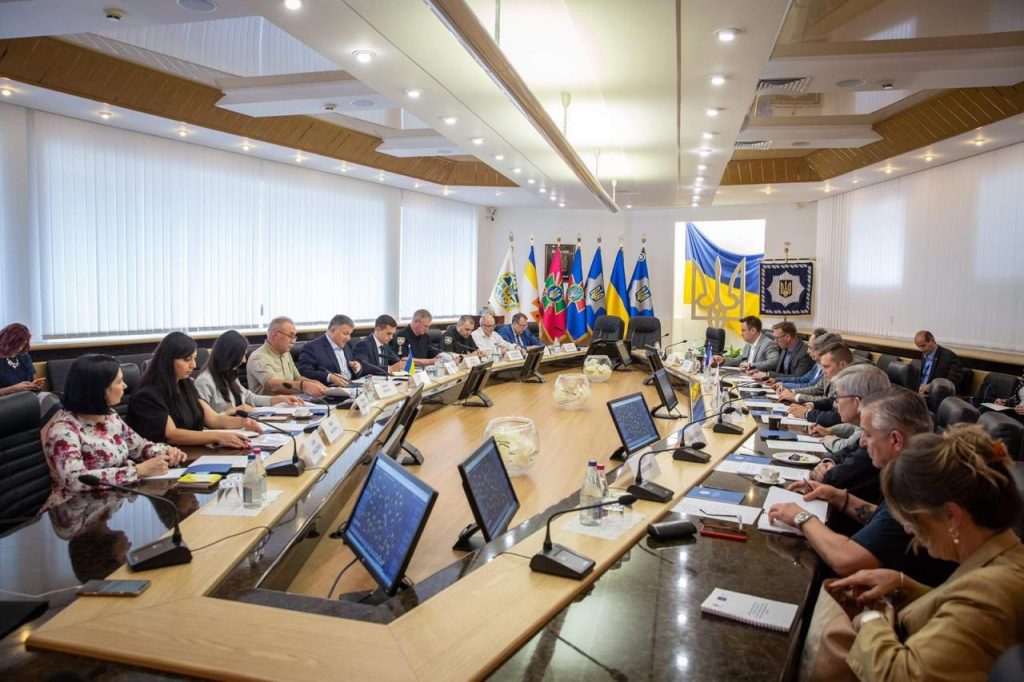 The Ministry of Internal Affairs has developed effective mechanisms to enforce the legitimacy of the electoral procedure, taking into account experience earned during the presidential elections and is ready to counter any possible threats. Ukrainian law enforcement bodies are ready to share their experience with foreign colleagues.

Today, on July 21, 2019,  the Minister of Internal Affairs of Ukraine and the head of the National Police held a meeting with representatives of international organizations and partner countries that monitor the extraordinary parliamentary elections. The delegation includes William Taylor, USA Chargé d’Affaires a.i. in Ukraine, the EU Ambassador to Ukraine Mr. Hugues Mingarelli, the head of the Election Observation Mission of the international NGO CANADEM in Ukraine Mr. Lloyd Axworthy, the President of the Ukrainian World Congress Eugene Czolij, and diplomats from the G7 countries.

“By tradition, we held a meeting with representatives of international organizations and partner countries – observers during the elections in Ukraine.  We presented the work of the MIA interdepartmental coordination headquarters and the system “Elections -2019”, familiarized them with the specifics of providing security, order, and protection of information (cybersecurity) during the current elections.   We agreed to share experiences”, – informed the Minister of Internal Affairs Arsen Avakov.

He stressed that MIA took into account the lessons learned during presidential elections, made appropriate adjustments to its work and is ready to counteract any challenges.

It should be noted that the investigators of the National Police investigated 135 criminal cases resulted from the violations revealed during the previous election campaign of the President of Ukraine.  Forty-seven cases have already been sent to the court, in 51 cases suspicion was declared to the persons involved, and in 37 cases the investigation continues.

A vivid example of the work of law enforcement is the declaration of suspicion and removal from office of Vladimir Sabadash, the mayor of the city of Vasilkov in the Kyiv region.  He is reasonably suspected of committing a crime involving the bribery of voters in the interests of one of the candidates for the President of Ukraine.

Two hundred fifteen persons were brought to justice and fined after investigation of the administrative violations related to the electoral process.

“To maximize our response to possible violations of the electoral law and ensure the transparency of the electoral process, we have developed our appropriate tools.  Representatives of the public, including the Civic Network OPORA, who is a reliable partner of the MIA, took part in the development of algorithms of our actions.  We are grateful to them and will be happy to continue this cooperation”, – noted Arsen Avakov.

Also, MIA has developed an “Election 2019” computerized system, which successfully functioned during the presidential election and is now working.  Also function a coordination headquarters, which includes representatives of the Ministry of Internal Affairs, the National Police, SBGS, SMS, SES, and the National Guard. Situational centers are deployed in the MIA central offices and regional offices throughout the country.

During the elections the NPU and NGU special force units work in 24/7 mode; also for the first time, the Unified MIA airborne public safety and security service is being used.

The President of the Ukrainian World Congress Eugene Czolij said that, despite the continuation of Russia’s hybrid aggression against Ukraine, the law enforcement agencies of Ukraine had successfully ensured the safe holding of the parliamentary elections.

“During the presidential election, our team was represented by 122 observers who have monitored mass media in 30 countries in 20 languages.  They recorded attempts to misinform the Western world about the electoral process in Ukraine, as well as to denigrate each of the candidates.   In our report, we once again emphasize that the Russian Federation tried to disrupt the election process during the presidential campaign in Ukraine”, – said Eugene Czolij.

Arsen Avakov replied that Russian provocations did not stop either during the presidential or during the parliamentary election campaign:

“Russian and occupational mass media continue to promote propaganda.  Also, the occupants continue to violate the regime of silence in the east of the country; for example, today, four Ukrainian soldiers were blown up by a land mine, two of them perished.  Unlike the presidential campaign, during the parliamentary campaign, we did not record serious cyber attacks.  We constantly collaborate with British, Canadian, American, and European colleagues, as well as with offices of Facebook, Google, and Twitter.”

International observers praised the high level of the MIA efforts to provide security during parliamentary elections in Ukraine. They asked the Ukrainian law enforcement agencies to share their experience with countries that are also fighting Russian hybrid attacks.

During the elections of the people’s deputies of Ukraine, the safety of citizens and the order at the polling stations is ensured by 132, 5 thousand law enforcement officers: almost 74 thousand police officers, seven thousand NGU soldiers, 38.2 thousand rescuers, and eight thousand border guards.

One hundred ninety-nine district election commissions and almost 30 thousand polling stations are under round-the-clock protection. Also, the NPU protects foreign observers and provides them with assistance.

To document offenses, have been created more than 1,300 investigative and operational groups and 160  explosion prevention groups to respond to reports about the mining of polling stations.

As of July 21, the Ministry of Internal Affairs and the National Police received 8385 appeals from public organizations and citizens about violations related to the electoral process.  They were submitted from almost all regions of our country. Some of them are already checked, and procedural decisions are made.  Three hundred seventy-seven criminal proceedings were opened.  More than 1200 administrative reports were drawn up.